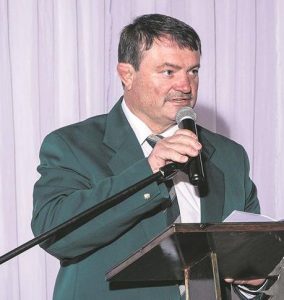 Our federation Western Cape Wrestling, under the leadership of president Sakkie Bosse, is on the move and making the Western Cape Provincial Sport Confederation proud with its achievements.
Six of the Western Cape’s wrestlers are currently taking part in the African Championships in Algeria and we have already won a gold medal, a silver and two bronze medals.
Wrestling WC’s Jeandre van Riel, who is competing in the 74 kg category, has the chance to make WCPSC even prouder when on Sunday he will be aiming to qualify for the Olympic Games that is taking place in Tokyo later this year.
On Sunday Jeandre has to win either bronze, silver or gold to qualify for the Olympic Qualifying Tournament in March in Morocco. There he needs to win silver or gold to be in contention for the national team that goes to the Olympic Games. Sakkie says he was confident that Jeandre has what it takes to go all the way.
WC Wrestling is also proud to be hosting the National President Championships in Bellville South on 27 and 28 March. We can expect between 300 and 400 wrestlers from all over the country to descend on Cape Town for this big tournament.
This tournament caters for wrestlers from 9-13 and 14-20 years old. According to Bosse it is quite a tough tournament, as a 14-year-old wrestler can come up against a 20-year-old one.
In May the Western Cape Open Championships takes place in Belhar and here our clubs from Western Province, Boland and even some from Gauteng will be competing for top honours.
Bosa said WC Wrestling has a few important objectives for this year. The first one is to win the team competition at the nationals here in Cape Town. He says sport in Gauteng, especially wrestling, is much bigger but the Western Cape has a cup to defend and is determined to do just that.
Another goal is to get enough funding to boost the development program – a key component of the WCPSC program. Bosse wants to generate enough funding to enable more athletes from previously disadvantaged communities to join wrestling clubs and take part in competitions.
He believes the more our previously disadvantaged athletes take part locally, the better they will get, and he wants to see them go through the ranks to represent not only the Western Cape, but also South Africa.
President of the WCPSC JP Naude, says he is impressed with WC Wrestling’s plans and achievements and will be following their progress keenly. He said he loves the enthusiasm and passion for the sport and is sure that it would reap them great results in future.
Facebook
Twitter
WhatsApp
Email
Print