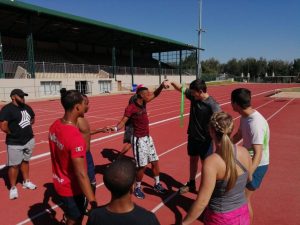 Western Cape Sport Association for the Physically Disabled (WCSAPD) president Mark Beak is confident that his organisation will get the green light to return to play soon.

Mark explained that their national body, the South African Sport Association for People with Disabilities (SASAPD), has already submitted their outline document for a return to play three weeks ago to the Minister of Sport, Arts and Culture. They are now waiting for the thumbs up from the Minister for them to commence.

Athletics, and specifically the Paralympians and other athletes shortlisted to try and qualify for the Tokyo Olympics, will be the main priority. The Olympic Games have been postponed until 2021 due to the outbreak of the Coronavirus and the subsequent lockdown.

He added: I already negotiated with WP Athletics and the City Cape Town for them to return and they have already given permission. But they cannot return to training until the Minister of Sport, Arts and Culture gives us the green light.

I am also in negotiation with Stellenbosch University to get the athletes that are training under Maties Athletics Club to commence with their coaches at Coetzenburg Athletics Track. Then our other sporting codes, the junior athletes and ones not selected for qualifying will probably go back to training at a later stage. That date is to be laid out and approved by SASAPD.

That will also apply to our other sporting codes and all of them will return to play at a later stage.

Mark was confident that they will get a yes from the Ministry of Sport, Arts and Culture, as he was intimately involved with compiling the document that SASAPD submitted to the Minister. He added that he was very much aware of the contents of the document and was positive that it met all the requirements as set out by government.

My son is a para-athlete in a wheelchair, and he is a high risk with his spinal cord injury, so I believe the document meets all the requirements for the physically disabled para-athletes, he explained.

The effect of the lockdown was catastrophic on their sporting code, simply because it affected their athletes’ training programs negatively. Also, the 2020 national championships for the physically disabled – that was planned for 21-25 March in Port Elizabeth – had to be cancelled. All competitions internationally were also called off.

The PE championships would have been used as selection criteria for the Olympic Games and the cancellation denied the athletes the opportunity to qualify.

Mark says the ban on travel means all their athletes who travel internationally for competitions were confined to their houses but now in level 3 they can at least go out on the road for training. However, they are sadly still waiting for the tracks to be opened for elite athletes and other venues for the rest.

He says on the positive side all their athletes stayed optimistic and motivated and trained hard with their coaches and managed to stay as fit and focused as possible under the circumstances.