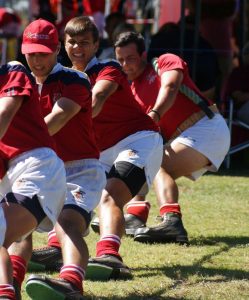 Western Cape Tug of War will be hosting the top young tug of war athletes in the country for the junior national championships that is taking place from 12 to 14 March at Drostdy High School in Worcester.
Western Cape Tug of War is a member of the Western Cape Provincial Sport Confederation. This is one of the biggest sport events for juniors in the country, with 1 400 participants coming to battle it out not only for national colours, but in three weight divisions also for Protea colours.
Those three teams – boys under 560 kg, girls under 480 kg and mixed under 520 kg – will be representing South Africa in the World Championships in Spain in September.
Jan Barnard, President of Western Cape Tug of War, is excited about his organisation hosting this prestigious meeting.  He says tug of war’s strength lies in the Western Cape, but he expects tough competition from the visitors from the Free State, Mpumalanga and Northern Cape.
He says Cape Town, Overberg, Cape Winelands and Eden are the big Western Cape districts for tug of war and he expects those teams to perform well. Barnard explained that even though it is a national championship, athletes present their schools.
Oakdale is a traditional powerhouse in the under 560 kg division for boys, and the last 10 years they have won the gold medal at the national and the world champs 6 times. The last three years they missed out on gold though, with the competition catching up.
Drostdy High’s girls under 480 kg is a team to be reckoned with, having won the national and world title last year.
An action-packed meeting is expected, with primary schools’ teams from under 10 doing their thing. Up until under 13 the teams are not allowed to wear boots but rather compete barefoot. Only when they are representing high school teams the athletes may wear boots.
Barnard said this is probably the biggest tournament of its kind in the world, as no other country has junior tug of war competitions. China has more than 2 million tug of war participants, but we are the only country in the world having junior competitions.

The World Championship was held in Cape Town two years ago and South Africa staged a special performance of barefoot junior tug of war that amazed the overseas visitors, as it is something unique to our country.

Approximately 3 000 spectators are expected, with the weigh-in happening on Thursday and the competition proper on Friday and Saturday.