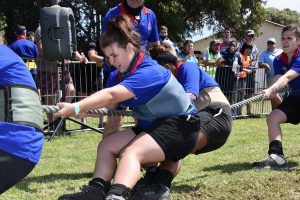 Western Cape Tug of War ended its 2020 with a big bang and the administrators and athletes are now looking forward to an action-packed 2021.

Three big competitions in the space of six weeks made up for the lack of competition during a Covid-19-ravaged year.

Jan Barnard, president of Western Cape Tug of War, said it was a good way to end the year.

We first had the South African Club Championships at Hartenbos, where 57 teams from all over the country came together to fight it out for national club honours. We had teams from as far as Kimberley and Postmasburg in the Northern Cape.

At that tournament, the Hartenbos club made a clean sweep and were crowned national club champions. Two weeks later we hosted the Western Cape Championships in Robertson. There the Cape Town District took top honours, and they are the Western Cape champions. What was interesting though, is that Eden won the most gold medals.

The points system, however, works in a way that it rewards depth in your squad, so more second, third and fourth places helped Cape Town to win the team competition. Eden, unfortunately, did not have the necessary depth to challenge seriously in the team category, as they did not have that many athletes there.

There the districts and provincial teams competing against each other. We had our four districts – Cape Town, Eden, Overberg, and Cape Winelands – as well as Gauteng and Northern Cape.

The competition was tough with 60 teams participating. Cape Town again came out tops because they were well represented. The competition for women was particularly fierce. The other teams came with the idea of giving Cape Town a hard time and they were very competitive, so we had an interesting tournament.

I am very happy that we had the opportunity to present these tournaments, even though we could not have any spectators because of Covid-19 regulations. Only the athletes and their supporting teams were allowed. So now we are finished for the year and we can start looking forward to 2021.