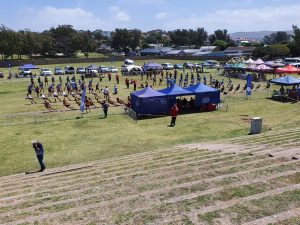 Western Cape Tug of War is slowly but surely finding its feet again after the lifting of the ban on competition due to the Coronavirus.

The Western Cape champion teams will be representing the province at the SA Champs, said Jan Barnard, president of Western Cape Tug of War. He said three districts will take part in the Western Cape Championships – Cape Town, Eden, and Cape Winelands.

On Saturday Helderberg, Breeriver, and Hartenbos were the Western Cape representatives at the SA Club Champs, with clubs from Northern Cape, Free State and Griqualand West also vying for national glory. Barnard said there were not as many clubs present as would normally be the case, as the sport is still on the comeback trail after lockdown. A lot of our clubs are still getting ready for competition.

But the competition was good, obviously not at the high standard one would expect, but that is understandable, as clubs could not prepare as they normally would have.

Everybody put in a lot of effort though and the teams worked really hard. We were quite surprised. Hartenbos made a clean sweep. They obviously have some very good athletes, but home ground advantage also counted in their favour.

They had 57 athletes who took part. The ladies from Helderberg (Cape) took the two gold medals and I want to congratulate them too.

Everybody adapted without problems to the Covid-19 protocols as prescribed by government and we were strict in the application of them. Once you have left the bio bubble, you had to undergo screening and be sanitised again if you wanted to come back in.

We sanitised the ropes between every competition and we had a fogger in the officials’ tent. The cloak rooms were also sanitised every 30 minutes. People cooperated and everything went smoothly.

We are grateful for that and are now looking forward to the next competitions. It was special and I am impressed.

To find out more about a club close to you, visit Western Cape Tug of War on Facebook.