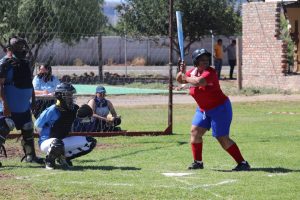 Western Cape Softball Association’s High Performance Program plans are afoot to pick up speed once the game has had a full return to play.

The High Performance Program was launched in the 2017/18 season in conjunction with the Western Cape Department of Cultural Affairs and Sport (DCAS).

Rodney Cupido, president of Western Cape Softball, was impressed with what they have achieved since the start of the program. We have identified talented players during our game and the focus was on teenagers and school kids.

So, we wanted to develop young talent from different districts and areas and brought them together. High Performance teams were formed, and we also appointed teams to focus on administration and coaching of these players at a higher level.

We started at the Athlone Stadium but later when the Lavender Hill Centre was opened, we moved there and the players were subjected to intensive training sessions on a weekly basis.

As soon as the fields are open again and more fields are available the focus will return to High Performance. We will then resume our search for fresh, new talent. We have achieved some success since the launch with a number of these players being selected for national teams. Some of them have travelled overseas where they could exhibit their talent. They performed well at our national tournaments and this is where they caught the eye of the national selectors.

Phouzaan Siebritz, secretary general of WCSA and High Performance Committee chairperson, says they have male and female players from under 12 up until seniors in the High Performance Program.

Phouzaan says the goal of the program is to prepare athletes for the next level of participation, specifically competing aggressively at the Los Angeles Olympic Games in 2028.

The development of the athlete must be done holistically and so they will be successful on and off the field of play. Players that 8 years ago entered the sport in Lavender Hill and Khayetlisha have now matriculated and are attending university or colleges and have represented Softball SA internationally at under 19 World Cups in USA and Canada.

They are all now in the senior national team having been to the World Cup in Japan. They are still only 19 and are the key players in our national setup.

The national body is now in the process of setting up High Performance Committees nationally. WCSA are rolling out the High Performance Program to the six districts, namely Eden, Central Karoo, Overberg, West Coast, Cape Winelands and eventually Cape Town.