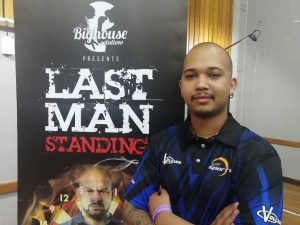 Western Cape Darts are on the up and up! Cameron Carolissen (24) from the Strandfontein-based Saints Darts Club won the recent African Qualifier for the Professional Darts Corporation World Championship at Goodwood Sports Club.

He is now going to represent Africa in England in December.

He hails from Portland in Mitchells Plain and is the country’s only darts player on the PDC circuit. Petersen will also be taking part in the World Championships. That means that Mitchells Plain will be represented by two players on the world’s biggest stage for dart players! The Last Man Standing tournament’s grand prize is the opportunity to go compete at the PDC World Championship in London and for Carolissen to be the chosen one is another feather in the cap of Western Cape Darts.

In Western Cape darts circles Carolissen’s great achievement comes as no surprise, as he has been working tirelessly on his craft since he started playing 12 years ago. He comes from a family with a huge love for the game of darts, with his father, Matthew, well-known for the development work he has done with junior players.

Unfortunately, Matthew died just more than a year ago and he could not experience his son’s greatest moment thus far in his career.

Carolissen followed in his dad’s footsteps by becoming the chairman of the Saints Darts Club.

Darts run through the family’s veins, it seems, as his sister Tyla represented South Africa a few years ago at the World Darts Federation’s World Cup in Turkey. His aunt Samantha Jeftha, also from Strandfontein, won national colours in 2003 and was the only female competitor at the Last Man Standing tournament.

He represented Western Cape at nationals at youth and senior level and his team won gold on both occasions. Cameron is a shining example of dedication, passion and hard work.

He shows that hard work really pays off. We wish him luck, not only for the tournament in London, but also with his future.

For more information on darts in the Western Cape, visit https://web.facebook.com/WesternCapeDartsFederation/?_rdc=1&_rdr