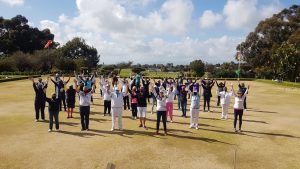 Bowls players in the Western Cape Bowls are enjoying their time back on the greens and the competitions are flowing thick and fast.

That is the word from Charmaine Mostert, marketing executive of Western Cape Bowls. She says the districts are very active and the development of the game under non-players is a big priority for all of them.

At Western Cape level things have stagnated a bit because of changes that need to be made to the constitution, as prescribed by Bowls South Africa, but Charmaine is hopeful that all the role players can get together soon so that that matter is resolved and bowls can thrive again at provincial level.

A big tournament that is planned for the new year is the South African under 30 championship in Hermanus.

Recent highlights include the Western Cape under 45 tournament that was hosted in Ceres by Cape Winelands. Bowls players from Cape Town, West Coast, Overberg, and Winelands made sure a high-quality tournament was enjoyed by all and sundry.

Charmaine says they have been very active since they were allowed a return to play and that bowls is one of the sporting codes that is very active and that makes her proud to be associated with the sport. We have been active for a while, actually almost immediately after receiving the green light to play again. We are doing a lot in terms of developing our game and the business league tournaments are very popular.

At one of these tournaments we had 170 people who have never been exposed to the sport and that was amazing. In Ceres we had between 48-54 newcomers and the clubs and districts realise how important it is to expose new players to the game and to grow and develop the sport.

Our youth programs are also going strong, with Bredasdorp, Hermanus and Overberg doing great work. West Coast are also producing good up and coming youngsters who are progressing well. We have had a setback in Cape Winelands with the youth program, but we are optimistic that we can get things going there again.

West Coast Bowls had their senior league for their clubs, while the interclub competition between Paarl and Wellington for senior males and females was hosted by Wellington.

So, all in all, bowls are in a good place and we are looking forward to growing the game even more and enjoying more competitions in the new year.