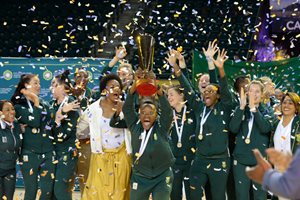 Cape Town played host to the 2019 Africa Netball Cup Tournament at the Bellville Velodrome from 18 – 22 October and the Proteas were duly crowned the champions after an unbeaten run.

The Proteas defeated Zambia 72-53 on Tuesday to win their sixth consecutive game in the tournament and claim the title. Shopping giant Spar, who are the sponsors of the team, pledged R10 000 per player including the management team following their win. It was the sixth time the Proteas won the title.

The tournament (Africa Netball Cup) saw eight African teams square off against each other. The countries that took on South Africa were Uganda, Zimbabwe, Zambia, Lesotho, Kenya, Tanzania and Malawi.

Bennie Saayman, president of the Western Cape Netball Federation, said she was proud of the team’s achievements. “With a new coach I think they have done well. But we expected our team to do well given their position on the world rankings.

“The tournament was well organised, but that is always the case in Cape Town. It was a good dress rehearsal for the World Cup tournament which will be held in Cape Town in 2023.

“What was really heart-warming was the good support from our people. The pavilions were full, and people really enjoyed the games and created a good atmosphere.”

Winning the title was the perfect start for the newly appointed coaching staff under head coach Dorette Badenhorst and assistant Dumisani Chauke. The Africa Netball Cup was used as a preparation for the Proteas’ series against England November 29 until December 1.